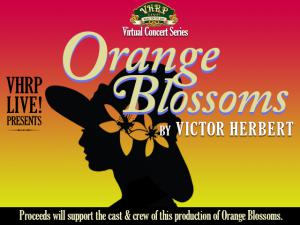 NEW YORK, NY, USA, October 12, 2020 /EINPresswire.com/ — Victor Herbert Renaissance Project LIVE! is like a dear old friend you can turn to in difficult times. VHRP LIVE! helped buoy its audience’s spirits these past few months by presenting the enchanting music of Irish American composer Victor Herbert. Beautifully captured archival footage of three VHRP LIVE! productions from six previous seasons of shows in New York City were offered for a week each. Devotees to the music of composer Victor Herbert from all over the world experienced these historic concerts on-line— The Serenade and The Debutante—in the comfort of their own homes. The last archival concert, Orange Blossoms, will open October 20-25th, 2020.

VHRP LIVE! Virtual Archival Concert Series
ORANGE BLOSSOMS-1922-Musical Comedy
Music by Victor Herbert
Original Libretto by Fred de Gresac
Lyrics by B.G. DeSylva
VHRP LIVE! Libretto by Alyce Mott
Shows: Tues.10/20 –Fri.10/23 at 7PM, Sat./Sun. 10/24 & 10/25 at 2PM
$10 Tickets on sale now: https://vhrp-live.thundertix.com
All proceeds from the sale of tickets support the cast of this production who have been out of work since the start of the pandemic.

The VHRP LIVE! Virtual Concert Series is the result of the organization’s effort to pivot with the changing rules of theater and find new ways to keep the music of Victor Herbert flowing, and to support company members who have been out of work since the beginning of the pandemic.

On August 25-30, 2020 VHRP LIVE! launched its Virtual Archival Concert Series with the 1897 operetta, The Serenade, first presented in 2016. Harry Forbes of Forbes on Film and Footlights and contributing writer for The Operetta Research Center in Holland said of that performance, “The strong-voiced cast gave an excellent account of the score…ace pianist William Hicks provided solid musical accompaniment, by turns rousing and tender. The whole was authoritatively led by Music Director Michael Thomas.”

On September 22-27, 2020, the second offering in the Virtual Concert Series from our November 2019 performance was The Debutante the 1914 musical comedy. Last month Operawire named VHRP LIVE’s The Debutante, one of the “Top 10 Operas to Stream This Week.” The Debutante is set in 1914 as Cubism, Art Deco and Women’s Suffrage were racing throughout the world of art and culture. It features soprano Claire Leyden, whom Opera News would later call “…every inch the star” for her performance in VHRP LIVE’s performance of Madeleine.

VHRP LIVE! presents its final offering in the virtual concert series, the 1914 comic operetta Orange Blossoms on October 20-25, 2020, Tuesday-Friday 7PM and Saturday and Sunday at 2PM. Orange Blossoms was presented by the company in October 2018 at Christ and St. Stephen’s in New York City. Orange Blossoms is set in France during the Roaring 20s and includes the usual cast of outrageous and wealthy characters including a lawyer, a playboy and damsels in distress. Through it all runs wonderful Herbert melodies including, “Way Out West in Jersey,” “A Dream of Orange Blossoms” and “A Kiss in The Dark,” which is one of the many opera gems Victor Herbert launched into popular culture. This song is a very modern examination of the power of a simple kiss to send someone swooning into the heights of true love, and has been recorded by Beverly Sills, Eileen Farrell, and others. Orange Blossoms was the very last theatrical score by Herbert before his passing in 1924.

The Victor Herbert Renaissance Project LIVE! is the world’s only company exclusively devoted to Victor Herbert, the Irish-American conductor and musician who composed innovative scores for early Broadway, as well as classical and popular music. Herbert contributed powerfully to the emergence of an authentically 20th century American sound. Supported by generous funding from The Victor Herbert Foundation, VHRP LIVE! is a registered 501(c)(3) corporation founded in 2014 by the company’s Artistic Director Alyce Mott, a leading Herbert historian and librettist and Music Director Michael Thomas. For more information please visit www.vhrplive.org

Previous Innovation and Diversity Bloom in the Desert
Next Select Commercial Funding LLC is pleased to announce the closing of a $4,400,000 loan