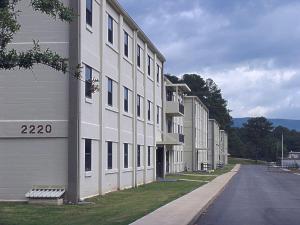 A 2010 view of the former barracks buildings that were used by the Women’s Army Corps. Interior asbestos abatement was completed in the early 1990’s.

For me, this process [at VA] was a nightmare! Even as physically messed up as I am, the VA flatly refused to give me my 100% rating”
— Ray Richmond, veteran of Fort McClellan

ALBANY, NEW YORK, U.S., August 19, 2020 /EINPresswire.com/ —
A national group of military service veterans that has an established medical history dating back to the Korean War Era, has been advocating at the Senate Veterans Affairs Committee for over a year to gain their assistance in launching a new investigative report by the GAO Office. The report would cover an updated narrative on the environmental contamination sites that were discovered in the aftermath years of the former Fort McClellan, Alabama Army base. The veterans feel that the new report is essential in facilitating the favorable outcome of their recognition at the Dept. of Veterans Affairs agency for their disability claims stemming from their service at the base. The Committee has been working in the background on this project for over a year now, but they have not yet launched the GAO authorization letter. The veteran’s group is angered by their lack of communication, inaction, and their unjustified delay.

The group is currently organized as a veteran’s legislative stakeholder’s group on Facebook by the name of Toxic Exposure Army Veterans of Fort McClellan. During the federalized operating years of the Fort McClellan Army base in Alabama from 1940 to 1998, a total of ten different environmental hazardous spill sites or toxic sources were discovered and documented by multiple military and civilian engineering reviews. The ten sites were scattered across four different locations that were either on or close to the base. Most of the sites languished for a duration of years without making any effective cleanup efforts, and then were overlapped as multiple exposure events to the soldiers according to the veteran’s group.

Since 1998, remedial cleanup projects have been completed for the sites, but no official health notifications ever issued to the service veterans who were stationed there at the time. A cancer tumor health registry was started on the base in 1970, but it was never carried over in the main environmental engineering reports, according to the veterans. The base was made up of a mixed population of men soldiers and service women from the former Women’s Army Corps, until that was decommissioned in 1977. The veterans are hoping that a new and updated GAO Office report will firmly establish the facts surrounding their environmental story and to steer the Dept. of Veterans Affairs agency into a sweeping process correction regarding their disability claims.

The McClellan Vets have met with various staffers of the Senate Veterans Affairs Committee at Washington DC meetings from 2016 to 2019. They have submitted their engineering source papers and explanatory narratives for the Committee to justify the new GAO Office report with, and their issues were positioned to be carried over to this new legislative session under the former chairman, Senator Johnny Isakson. But he abruptly left Congress, and then the new session fell into the abyss of COVID. The Fort McClellan Veterans were left behind and so was their efforts up to that point.

“The Committee actions have been preferentially doled out to mostly men’s groups, while having no regard at all for the urgency of matters involving other environmental exposure groups that also includes a population of Army women” said Sue Frasier, who is the national activist for the McClellan Group. Another McClellan veteran Ray Richmond of California said “For me, this process [at VA] was a nightmare! Even as physically messed up as I am, the VA flatly refused to give me my 100% rating [for disability]”. The veterans are outraged at the abandonment of their cause by Senator Jerry Moran and Senator Jon Tester. “Just how hard is it, exactly, to issue an authorization letter for a new GAO Office report by a Senate committee?” said Frasier.

The veterans plan to establish a national signature petition to call for the removal of both Tester and Moran from the Senate Veterans Committee so they can be replaced by a more functional and rational leadership for the next session, according to them.

LINKS TO REFERENCES TO HELP REPORTERS DEVELOP THIS STORY:

1. A 1998 GAO Office report establishing the fact that Dept. of Defense had no established policies in place to protect active duty soldiers from low-dose environmental toxic exposures prior to that year.
https://drive.google.com/file/d/139tdVa6ykuDFDZHrKHBwexKYceuJxnJ7/view?usp=sharing

2. LINK to the PowerPoint slide showing the Remedy Plan for the veteran’s group that was filed with the Senate Veterans Committee in 2019.
https://drive.google.com/file/d/1SxdZgQVB06iHLBMRlwGiLxs75Z9xCOnl/view?usp=sharing

3. LINK to just one out of the ten documented spill site reports surrounding the former Fort McClellan Army base prior to 1998. A (TCE) spill site at Anniston Army Depot.
https://drive.google.com/file/d/0BzqffQmFkrCBNFEzU29yc2RSeGs/view?usp=sharing

4. LINK to the PowerPoint slide showing the duration of years for the (TCE) contamination zone at Anniston Army Depot before it was fully cleaned up.
https://drive.google.com/file/d/1WA1tF33yjIrysiQ0JQBEXGsp6dwnNrfg/view?usp=sharing

** OTHER LEGISLATIVE CONTACTS ARE AVAILABLE ON REQUEST

1. Please do not develop this story as a personal illness feature story. It does not bring any help to our cause, & the reading audience has no filter
to determine what the health conditions would be to reasonably establish the veterans as (likely) toxic exposure cases. Please keep this story focused on the inaction by the Senate Veterans Committee. Please do not ask us questions about veteran’s population size

2. Please do NOT use old and prior news stories on our Fort McClellan Veterans matter and merge it in with this new and updated release. Other news reports are known to be holding false information about our cause. They may also be featuring veterans who are NOT a medical match to the known list of environmental toxic sources that are defined for Fort McClellan service. Not all health conditions are covered by this environmental situation. Reporters are cautioned to not approach just any McClellan service veteran for a comment who also happens to have just any medical condition. For VA purposes, we are required to be matched up by health conditions to the toxic sources that were documented to be at McClellan.