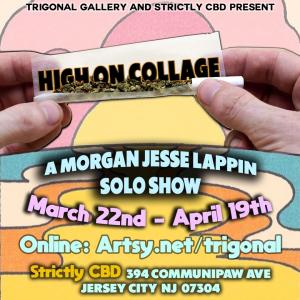 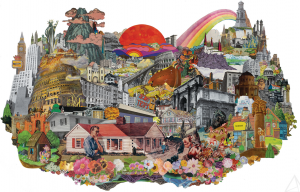 “Back at Home” by Morgan Jesse Lappin 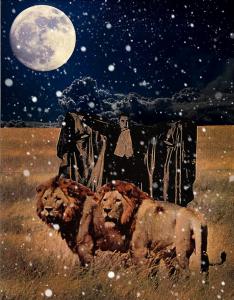 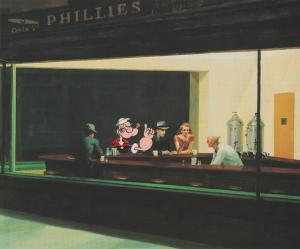 NEW YORK, NEW YORK, US, March 19, 2021 /EINPresswire.com/ — On March 16, Trigonal Gallery, a new private art gallery focused on secondary market collections and the work of emerging artists, premiered its first digital show featuring a series of artworks by the master of contemporary collage art, Morgan Jesse Lappin. The exhibition titled High on Collage runs online on Artsy through April 19, 2021. Trigonal Gallery’s Viewing Room is already open to the public, while the show itself will officially open on March 22.

Morgan Jesse Lappin is a Brooklyn-based multifaceted artist, designer, musician, entertainer, and the founder of the Brooklyn Collage Collective, the first assemblage of collage artists recognized worldwide. He is largely known for his impressive collages that the artist creates using comic books, audio cassette covers, VHS tape boxes, and other nostalgic materials from the 1980s. Lappin’s works represent rich and complex paper worlds that perfectly mix sci-fi and fantasy, horror and romance, comedy and chaos. His designs are also widely used in the fashion industry. The artist has released several lines of designer clothing, including a collection of collage jackets created in collaboration with the outerwear brand The Very Warm.

Morgan Jesse Lappin’s new art show with Trigonal Gallery is focused on “Back at Home,” a multilayered collage depicting a place that exists only within your mind but that you have always wanted to visit. The gallery will sell 14 prints of the piece, each numbered and signed by Morgan Jesse Lappin himself, and each released with a non-fungible token (NFT). On March 22, Trigonal Gallery will also present other notable works by the artist, including his original pieces “City of Boom,” “On a Clear Day You Can See Forever,” “Fallen Empire,” and “Late to BINGO!” among others. All of Lappin’s art pieces showcased at High on Collage can also be viewed personally at Strictly CBD in Jersey City, NJ.

Speaking of non-fungible tokens, Morgan Jesse Lappin has recently sold his first NFT piece, “Dracula’s Bitches in Night Time Snow,” which has marked the next pioneering move in his art career. The artist is planning to release NFTs regularly, and the next one titled “Nighthawks Popeye” is already available for sale at OpenSea.io. New NFT pieces from Lappin’s “Dracula’s Bitches” series will also be released soon.

On March 7, Morgan Jesse Lappin and Trigonal Gallery’s founder Jonathan Goodman held a very interesting Clubhouse session discussing contemporary art sales and the importance of NFT. Following the success of the first session, Lappin and Goodman have launched a weekly series, “Tea Time with Trigonal,” to discuss the business of art and the latest news from the gallery. “Tea Time with Trigonal” is now held each Sunday via Clubhouse.

In the coming months, Trigonal Gallery will also launch continuous art shows focused on both classic and emerging artists, as well as a celebration of World Collage Day in May.