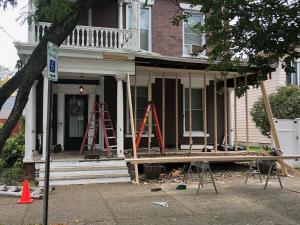 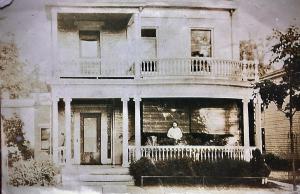 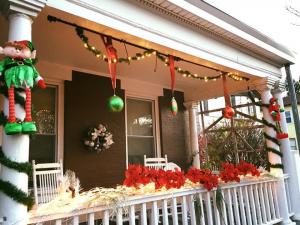 Daughter and her mother lived a normal life before the pandemic broke out. She hired a well-known contractor shortly after her mom died to fix porch.

Distraught homeowner in tears after well-known contractor made no attempt to resolve damages to make up for lack of work ethics.”
— Frederick Feyl

TROY, NEW YORK, UNITED STATES, January 29, 2021 /EINPresswire.com/ — The Covid pandemic has created not only early and tragic fatalities but has also caused other damages. The latter case is well illustrated by the experience of the six generation original homeowners great-great granddaughter, Author and Award Winning Screenwriter, who recently lost her mother at the inception of COVID (April 2020), and is now left with her ancestral home – a haunted house in the historical Lansingburgh, which has been featured in movies and TV series – in a precarious and unusable condition.

The Enslin Haunted House is popular with tourists, filmmakers, and those who want to spend an unforgettable day or night exploring and moving around its spooky rooms and spaces. The luxurious amenities and great ambiance make the Enslin Haunted Mansion a popular destination for short term stays. Past guests have included A-list actors, musicians, celebrity friends, and paranormal investigators.

Daughter and her mother lived a normal life before the pandemic broke out. She hired a well-known (trusted since 1915) local contractor shortly after her mom died to fix porch. Michele was devastated after she found out they started working without a permit for the City. The house needed a porch renovation due to previous contractor negligence causing major water damage, and so the repairs did not go well.

After an unprofessional attempt, the house has been left in a vulnerable position. The contractor was fired after two more attempts to keep them on, now resulting in more damages. To fix the house would require more money, and Michele can’t afford it, nor is there any option for a full demolition, as that would cost even more.

“The whole situation was played out unprofessionally. This home cannot be fixed without full demolition. I can’t even sell or rent the house,” says Michele.

The homeowner policy was currently revoked from her insurance company, leaving her even more vulnerable. Her haunted Upstate NY house is now for sale, home to six generations, hosted an attractive Cabaret restaurant when her great grandfather ran the affairs, and subsequently became a hospice and funeral home after the arrival of her great grandmother from Bavaria.

With the current situation of the house, Michele is worried that the house will lose its attraction, and she will not be able to rent or even sell it out.

If you would like more information about this topic, please contact Michele at 914-815-2222 or email at michelecbell@gmail.com.