The Constant Flow of Life Despite the Chaos; Daniel Chapman Releases His New Book 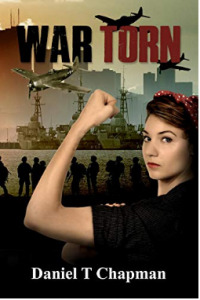 NYC, NEW YORK, UNITED STATES, August 17, 2020 /EINPresswire.com/ — War Torn, a recently published book of the creative writer Daniel Chapman, shows that life is not as chaotic as the world. Instead, ruination begins when we are caught in between these worldly mayhems – with no other way but through it. The book, War Torn, shows that constant exposure of the human psyche to economic desolation and privation can cause a propensity for depression and defeatism.

The destruction of oneself, however, is the road to development; ruination is the genesis of transformation. The highlight of Daniel Chapman’s War Torn is not about the difficulties brought by World War 2 nor by the main character’s traumatic experience with her family, rather the intensity of the human prowess to bounce back after all adversities. Everyone, no matter how insanely rock bottom has reached, has an absolute fighting chance.

“The Whole is Greater than the Sum of Its Parts” displays a certain level of truth as the book War Torn also tackles the amalgamation of different adversities in life. From socio-economic hardships to familial conflicts to personal miseries, all these add up and transforms into a strong coalescence of chaos in life – pummeling one’s soul in conceding defeat.

Daniel Chapman showed the essence of perseverance in War Turn. The light brought by the tenacity of human nature to struggle against the illusion of defeat brought by the world’s hardships.

If you want to read more about War Turn and relate to the personal development brought by challenges in life, you can find it on Amazon. The book is available in a variety of formats to suit the needs of the reader.

Daniel Chapman is an author, also a poet, who retired from education years ago. Then, he pursued his hobbies, which are traveling and writing. He wrote War Turn after he tried to duplicate what his parents did and explored his parent’s point of view. As his experience in duplicating what his parents did is about to end, the genesis of a new realization by Daniel has brought to light – “I come from an extraordinary family who lived through extraordinary times.”