TGTE Appeals to US Secretary of State Pompeo to Ensure Sri Lanka Does Not Become a Vassal State of China. 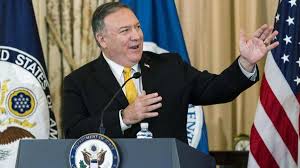 China recently assured Sri Lanka that it will protect Sri Lanka in international forums including at the UN Human Rights Council.

It is our belief that ultimately the best solution for peace, justice, and the security of the region is a referendum for Tamils”
— Visivanathan Rudrakumaran

In a letter to US Secretary of State Mike Pompeo, the Prime Minister of Transnational Government of Tamil Eelam (TGTE) urged him to ensure that Sri Lanka does not become a vassal state of China.

China recently assured Sri Lanka that it will protect Sri Lanka in international forums including at the UN Human Rights Council.
https://www.einpresswire.com/article/529211962/tgte-urges-un-human-rights-council-to-take-strong-action-against-sri-lanka-despite-china-s-pledge-to-protect-sri-lanka

The letter further states that:

“We would also like to call your attention to the situation at the port at Hambantota, which has been leased to a Chinese state-owned company. As the 2020 Annual Report from the US Secretary of Defense has noted, China appears to intend military use for this base as a means of power projection into the Indian Ocean.”

“As China is notorious both for human rights abuses and wanton environmental destruction, there is rational fear of the consequences of China’s use of this port. This increasing cooperation between China and Sri Lanka threatens to turn Sri Lanka into a Chinese vassal state.”

“We therefore appeal to you to consider using the authority and discretion of your office to address these issues. Specifically, we ask you to raise these accountability issues as well as China’s use of the port at Hambantota on your visit to Sri Lanka.”

“As you are likely aware, an estimated 70,000 people were killed in the last stages of armed conflict between the Sri Lankan government and the Liberation Tigers of Tamil Eelam (“LTTE”). The Panel of Experts appointed by former UN Secretary General Ban Ki Moon reported credible evidence of war crimes and crimes against humanity committed by the Sri Lankan state and the 2015 report of the Office of the High Commissioner for Human Rights Investigation on Sri Lanka (OISL) noted the systemic crimes were committed primarily by the state of Sri Lanka.”

“It is our belief that ultimately the best solution for peace, justice, and the security of the region is a referendum similar to those in Scotland, Eritrea, and Kosovo. The aspiration to freedom of the Tamil people who inhabit the NorthEastern part of Sri Lanka and the 700 km costal area is just and valid, and the 2009 Mulliviakal genocide and the ongoing efforts to destroy the identity of the Tamil people makes the question urgent as well.”

ABOUT THE TRANSNATIONAL GOVERNMENT OF TAMIL EELAM (TGTE):

The Transnational Government of Tamil Eelam (TGTE) is a democratically elected Government of over a million strong Tamils (from the island of Sri Lanka) living in several countries around the world.

TGTE was formed after the mass killing of Tamils by the Sri Lankan Government in 2009.

TGTE thrice held internationally supervised elections among Tamils around the world to elect 132 Members of Parliament. It has two chambers of Parliament: The House of Representatives and the Senate and also a Cabinet.

TGTE is leading a campaign to realize the political aspirations of Tamils through peaceful, democratic, and diplomatic means and its Constitution mandates that it should realize its political objectives only through peaceful means. It’s based on the principles of nationhood, homeland and self-determination.

TGTE seeks that the international community hold the perpetrators of war crimes, crimes against humanity, and genocide against the Tamil people to account. TGTE calls for a referendum to decide the political future of Tamils.

The Prime Minister of TGTE is Mr. Visuvanathan Rudrakumaran, a New York based lawyer.

Tamils in the island of Sri Lanka faced repeated mass killings in 1958, 1977, and 1983 and the mass killings in 2009 prompted UN Secretary General Ban Ki-moon to appoint a Panel of Experts to report on the scale of the killings.

According to UN internal review report on Sri Lanka, over 70 thousand Tamils were killed / unaccounted for in six months in early 2009 and Tamil women were sexually assaulted and raped by the Sri Lankan Security forces.

A report by the International Truth and Justice Project (ITJP) published details of Sri Lankan Military run “Rape Camps”, where Tamil women are being held as sex slaves. There are over 90 thousand Tamil war widows.

Thousands of Tamils including babies disappeared and UN ranked Sri Lanka as having the second highest number of disappearances in the world.

According to this UN report, the killings and other abuses that took place amount to war crimes and crimes against humanity. Independent experts believe that there are elements of these abuses that constitute an act of genocide.

Members of the Sri Lankan security forces are almost exclusively from the Sinhalese community and the victims are all from the Tamil community. A Buddhist Monk shot and killed a Sri Lankan Prime Minister 1959 for having talks with Tamils.

Previous ELECTORAL ENGAGEMENT VOTE IS IN: BIDEN 88%, TRUMP 74%
Next Formerly Incarcerated Get Empowerment and Free Training Through Workshop in Business Opportunities