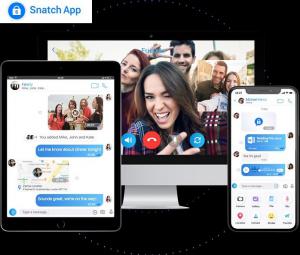 NEW YORK, NY, USA, January 11, 2021 /EINPresswire.com/ — Whatsapp, a company that promotes itself as having privacy as its focus, has just announced a change of its terms of service which will compel users to share their personal data with Facebook, its parent company. This data includes location, phone numbers, contacts’ phone numbers, and more. Should users not agree to these new terms and conditions before 8 February, they will lose access to their accounts.

The announcement has come with significant backlash, including from Tesla CEO Elon Musk who prompted users to shift to other encrypted messaging apps. Mike Butcher, TechCrunch’s editor, also advised followers to move to other apps if they had privacy-concerns. Some examples of prominent encrypted messaging apps include SnatchApp, Telegram, and Signal.

In response to the growing concerns regarding user privacy, SnatchApp was created by industry veterans Avi and Henri Benezra to become the most secure and private messaging app. This latest news from Whatsapp has only served to solidify its position in the market. Combined with innovative technology, SnatchApp consistently rates better than its primary competitors on the Google Play Store and iTunes. Android users in particular have contributed to SnatchApp being downloaded more than 500,000 times.

The app has been reviewed on Google Play by more than 2 000 people and the official rating stands at 4.2 out of five. This is impressive when compared to Zoom’s official rating of 3.6 out of five as reviewed by more than one million people. Although Whatsapp has a rating of 4.3, many of the million reviews that the app has received have been negative.

SnatchApp is one of the latest messaging apps, but its popularity has increased exponentially. This success could be attributed not only to its use of state-of-the-art technology, but also its solid security features. The app offers the possibility of self-destructing messages, and the ability to hide messages which means that when you send a message to another user, it comes in a “sealed envelope” so that no-one can see who you’re communicating with. More than that, you have the chance to take control over who can see when you’re online and the delivery status of messages that you receive.

As a safer alternative to Skype or Whatsapp, both voice and video calls may be encrypted with Snatchapp. These conference calls may consist of no more than 10 people, but the safety associated with the encryption is appealing not only to private individuals, but also to businesses who require the ultimate protection of their data.

In contrast to Telegram, SnatchApp uses open source code. This entails having the messaging app available to anyone so that professionals can corroborate that the code is in fact as secure as the creators claim. This means that the software is open to updates and auditing by professionals can be used to verify that the data assembled is secure and that there is no risk of private conversations being leaked.

SnatchApp, just like WhatsApp, Signal, and Telegram use end-to-end encryption. This means that encoded messages between individuals or groups remain private without risk of third parties being able to access the information. SnatchApp and Signal have end-to-end encryption as its default system, but for Telegram it’s necessary to activate the setting.

Data collection is a feature of all of the most popular messaging apps, and it is one of the most complicated issues related to messaging apps. As such, it is a contentious issue which inspires a lot of debate. In essence, even if an app is completely encrypted, some form of data is generally collected – this includes the frequency of chats to an individual or group in your smartphone’s phone book, your IP address, the time messages are sent, and also your phone number. Called metadata, this information can be spread over numerous platforms and what data is collected depends on the service provider. For most people, it’s important to make sure what data is being collected and for what purposes.

There is no doubt that any single provider will be able to cater to all that you would hope when it comes to security and privacy. However, user data privacy remains at the top of most people’s priorities. As such, it remains essential that you ascertain what data is collected by the messaging app that you choose. Once you understand what data is collected by the competitors, you should be able to make an informed decision about which app protects the data that you care about the most.

Ultimately, the announcement by Whatsapp that it will be sharing user’s data with Facebook and other companies owned by Facebook has had a fierce reaction for everyone who uses the popular messaging app. It has resulted in the call for a max exodus of the messaging app – and in its place we have a couple of companies vying for top place. Of these, SnatchApp, Telegram, and Signal stand out as having the biggest potential for becoming the new go-to messaging app for both individuals and businesses with all of them hoping to reach new users with promises of data protection.

Find the best version of SnatchApp for you: