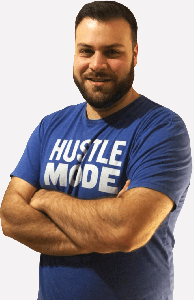 NEW YORK, UNITED STATES, October 12, 2020 /EINPresswire.com/ — Stefan Ciancio has made a name for himself as a Marketing Coach and Online Marketer, whose lightbulb revelations on leveraging Pinterest to drive online traffic and sales have made him the highly successful entrepreneur he is today. However, the path he took to get to this point might surprise you.

Deciding to take a conventional route to employment, he undertook a mechanical engineering degree at 18 and started a nine-to-five job right after graduation. He worked at that job for three years – and spent the whole time unfulfilled, unhappy, and unimpressed with where his supposedly safe path in life had taken him. He realised he didn’t want to work for someone else and make money for other people; Stefan wanted to be his own boss, and he knew he was capable of doing it, too.

From the age of 14, it was clear he had the entrepreneurial spirit that has since taken him so far. A keen baseball fan, he wrote and sold an e-book with a clear audience, advising autograph collectors on which players would sign things for supporters and which were best not to approach.

While he made good money and proved to himself that he had the brains to pursue business, the pressures to go to college at any cost caused him to waste valuable time and money. Now, living the life he was meant to live and running the business of his dreams from the comfort of his home, he can see just how unsuitable college degrees can be for so many people.

His journey has made him realise that there is a way better path that no one tells you about. Finding that path himself is what really brought him freedom in both his professional and personal life. He says, “thanks to the internet, we now have the opportunity to go and learn about anything, and we need to get out of the mindset that a college education is the only thing that matters”.