Recycled Materials for a Portrait of Jesus: Brian Rock’s Striking Artwork in Times of World Crisis 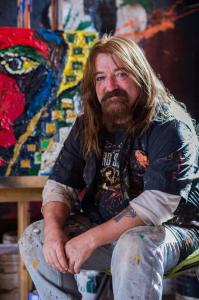 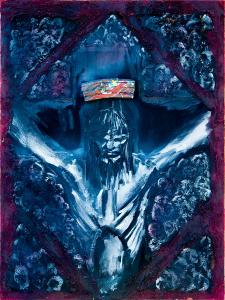 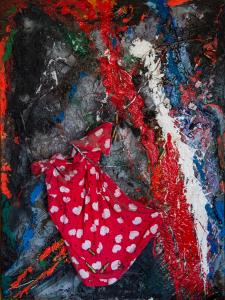 I challenge you to look into yourself, and if I have identified a communal feeling, the purpose of all art has succeeded.”
— Brian Rock

NEW YORK, NY, USA, November 3, 2020 /EINPresswire.com/ — These times of uncertainty have pushed many people to turn to their faith. In a year full of worldwide events with a pandemic still raging, and protests for social change rising around the globe, artists have been moved to create art that sends a strong message and impacts their audience. The current crisis is causing a significant rethink of our core values, faith, and life purpose. One striking and thought-provoking work is “Post NY Jesus,” a painting by Irish master artist Brian Rock, which is currently on view on a digital exhibition on Vivid Arts Network. The work created with recycled acrylic on canvas sends a message of peace awareness while also touching the strong theme of environmental conservation. Two global issues that are worthy of attention. Brian Rock’s contemporary portrait of Jesus is innovative and creatively charged with a unique technique and application. This large scale recycled acrylic representation assumes no one color. Instead, it breaks up the traditional shape, usually portrayed in images depicting Christ with heavily colored geometric patterns and lines. The use of vibrant colors is broken up by the stark intentional use of white and heavily applied color with broad and deep brush strokes. The background shapes become indistinguishable to the captivating eyes gathering the viewer in. Startled by deep outwardly seeking eyes, you are instantly brought face to face with the intense and well-known face of Christ. Brian Rock’s contemporary portrait of Jesus is anything but simple. To search the contours within the visage is to experience the instincts and care contained. As each color bears its unique place on the canvas, the intention is evident as this face bypasses race, gender, and culture by bridging the gap of belief systems. Black lines create stark shadows on the face, as each space is filled with rough strokes that increase the visceral emotions on display. Rock’s work pours out from the deep wounds and the war he has experienced firsthand, and this image, which contains just as much power and impact as his others, seems now more relevant than ever before. Using his art as a healing modality, Rock is vocal about the positive influence art has had in his life during his journey of overcoming trauma. Living with the desire to give back as a veteran, he is active with several charities, being of contribution to his community through empowerment and creativity. Born in Ireland in 1965, Brian Rock grew up during the most turbulent years in Northern Irish history: the 1960s to the 1990s. Rock’s childhood was one of sectarian violence, attacks on his home, and a constant state of vigilance to stay alive. Seeking solace from a life saturated in violence, Brian moved to the United States in 1998 and served in the U.S. Army from 2000-2013, including an overseas tour. His experiences became the chaotic muse that brought art into his life. Each expression became the starting place for healing to begin. His work has been published in Art Magazines, and he has been honored as one ArtTour International Magazine‘s Top 60 Masters. He has been featured in the U.S. Museum of the Army as well as work with the Global Campaign against IEDS. Ian Anderson (Jethro Tull) used his paintings on the Wooten Bassett Town video. Rock works consistently with Veterans Organizations as his life is ingrained in those experiences from his childhood and his service in the United States Military.