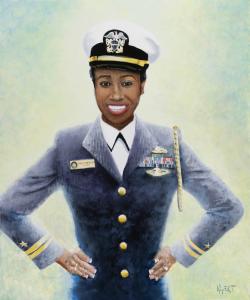 U.S. Navy Lieutenant Arabia Shanklin is one of 12 women depicted in the Proudly She Served portrait series by artist Steve Alpert.

The portraits present a very positive message about these pioneering women who achieved significant careers in our country’s military. ”
— Linda Maloney, Project Director, Proudly She Served

NEW YORK CITY , NEW YORK , UNITED STATES OF AMERICA , March 17, 2021 /EINPresswire.com/ — Artist Steve Alpert recently added the finishing brush strokes to the 12th oil painting in the Proudly She Served Portrait Series paying homage to women in the United States military and veterans. The series features large-scale portraits of extraordinary women military officers and enlisted personnel from each branch of the service. The portraits convey a message about each woman’s courage, strength, resilience and selflessness while serving in the military and in their lives as civilians.

The 36-inch-by-30-inch portraits present images of the generations of women in the American military from World War II to today’s conflicts. These everyday heroes have made significant contributions to their country through their service. The series of compelling portraits and their captivating stories are certain to inspire generations of women to follow in their footsteps.

In announcing the completion of the portrait series during Women’s History Month, Alpert, executive director of the project, said: “I began this project to tell the story that women in uniform are just as courageous and capable of leadership as men soldiers. Simple as that. Women are unheralded as such, and I wanted to contribute to telling their success stories through portrait paintings in oil.”

Alpert reinvented himself as a professional landscape and later portrait artist after working nearly three decades in the TV news industry. He has created many artworks with military themes.

Proudly She Served project director and former military aviator Linda Maloney, currently an author and business owner, said the portraits “present a very positive message about these pioneering women who achieved significant careers in our country’s military. The women are very resourceful, innovative and deeply caring advocates for military veterans, especially those men and women who are transitioning to civilian life. They are also amazing role models for women who are focused on serving their country, families or communities while engaged in meaningful careers.”

About Proudly She Served Portrait Series

The Proudly She Served Portrait series highlights the valor, bravery and dedication of women in the United States military and veterans. The 12 large-scale portraits convey a positive message about the strength, courage and selfless service of women in the American military and veterans. The paintings and women’s compelling stories will inspire generations to follow in their footsteps. For more information visit the Proudly She Served website: https://www.proudlysheserved.com/