‘Projection as Protest’ in front of UN Headquarters in New York on International Day of Disappeared: TGTE 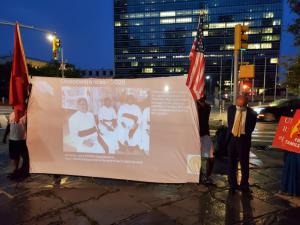 Protest Outside UN in New York

Visuals of hundreds of Disappeared Tamils were screened outside the UN

Transnational Government of Tamil Eelam (TGTE) organized several protests in different parts of the world to observe the International Day of Disappeared on August 30.

This included a unique ‘Projection as Protest’ event in front of the United Nations Headquarters in New York where visuals of hundreds of Tamils who Disappeared were screened. Protests were also held in France, UK, Germany and Australia, while Tamils in Canada embarked on a 424 km ‘Walk for Justice’ to bring to public attention the issue of missing Tamil youth in Sri Lanka.

The Office of Missing Persons (OMP) established in 2016 by the Sri Lankan government, under pressure from members of the United Nations Human Rights Council, had been done without any participation of families of those who had gone missing or of any international experts. After four years of existence, the OMP has not released even a list of combatants taken into custody during the armed conflict who later disappeared. Sri Lanka’s judiciary refuses to enforce an order to produce the list despite a senior military officer admitting to its existence in open court. Though Sri Lanka has also ratified the UN Convention for the Protection of All Persons from Enforced Disappearance, it had blocked the right of victims to be represented independently before the “Committee” established under the Convention by making reservation to article 31 of the Convention.

In January this year, Sri Lankan President Gotabaya Rajapaksa admitted that over 20,000 Tamil youth, who had surrendered to the Sri Lankan army at the end of the civil war in 2009, were dead – without explaining how they died or what happened to their remains.

‘The issue of missing Eelam Tamils is an affront to the entire international community and steps are urgently needed to bring those responsible to justice” said Ms Anuradha Mittal, an internationally renowned expert on development and human rights, who also spoke on the occasion. She further commented that the people who committed these crimes are back in power with complete impunity. What message does this send out to the world? If the Island nation with the 2nd largest number of disappearances can get away with complete impunity, it sends a message that any country can do the same. She further said if the government is not going to produce the list of those missing, it is up to us to create a database. When were they taken away? How did they disappear? Where are the ICRC reports? We cannot be silenced because if we are, that will happen again. Collect testimonies; continue to protest; Continue to send letters to the United Nation. She said it was wrong to see the problem as being that of only Eelam Tamils. Instead it should be taken up as a global human rights issue by all. Ms Mittal concluded by saying that it was vital to note that Anuradha, as an Indian, as a American, stood together with those families of the disappeared in Sri Lanka.

Mr. Koalaga Oumarou Paul, ONG-Diplomatie et Paix Internationale Executive Director, called for strong action because, living in 2020, it was not at all acceptable that we see enforced disappearances. He recalled similar situations seen in Africa, particularly in Algeria, Sudan and Zimbabwe. He concluded by saying that as the international community we supported you. You have a very strong voice from Africa and to the Tamil people, we say we are supporting your fight.

Mr. Visuvanathan Rudrakumaran, the Prime Minister of the TGTE, cited the OISL Report which stated that majority of the victims of the enforced disappearances were from the North East and the observations by Mr. Emmerson, the UN Special Rapporteur on Human Rights and Counterterrorism that “the Tamil community has borne the brunt of the state’s” well oiled torture apparatus, as the law is used disproportionately against them”. He went on to state that the human right violations, be it enforced disappearance or torture, were not ethnic neutral, but Tamil ethnic based. He further stated that Sri Lanka used enforced disappearance as a tool of Tamil genocide. He also cited the 6th Amendment to the Constitution which prohibited peaceful advocacy for an independent state which exclusively targeted the Tamils. ‘Ethnic centred systematic pervasive human rights violations warrant remedial justice’ he stated. LTTE combatants should be treated as Prisoners of War (POW) and be released immediately pursuant to Geneva Convention.

The UN Expert Panel Report and the OISL Report have recorded that the crimes were committed by the Sri Lankan State itself. However, to seek justice against the state of Sri Lanka in its domestic tribunals in foreign countries, the legal doctrine of “sovereign immunity” remained as an obstacle. Thus Rudrakumaran urged the international community to bring legislation to remove sovereign immunity as a defence to international crimes. He asked if sovereign immunity can be removed from being a defense to commercial transactions, why it could not be removed for international crimes. He further called on the Member States to the International Convention for the Protection of All Persons from Enforced disappearances to refer Sri Lanka to the “Committee” established under the Convention under Article 32 of the Convention.

Mr. Mahinthan Sivasubramaniam, the TGTE’s Minister for Human Rights and the Prosecution and Prevention of Genocide and Mass Atrocities and organizer of the Webinar gave the vote of thanks.

The event was moderated by Miss Abiramy Logeswaran and by Rathika Mampalam, both second generation Diaspora Tamils. The reverberating messag delivered by the young Tamil participants at the event was that until justice and freedom was obtained by Tamils, the struggle would continue.