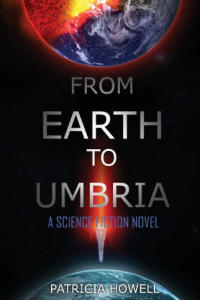 From Earth to Umbria: A Science Fiction Novel

“One of the newest authors of the year, Patricia Howell, published her book ‘From Earth to Umbria’. A nail-biting adventure of escaping from foreseen cataclysm”

NEW YORK, NEW YORK, UNITED STATES, August 17, 2020 /EINPresswire.com/ — Patricia Howell’s From Earth to Umbria shows the distressing narration of a world about to face complete destruction. With the imminent danger lurking in the not so distant future, our main character is faced in saving humankind from complete extinction – an enormous responsibility with no room for errors. Fallen into the shoulders of one person alone, Patricia Howell’s masterpiece takes her readers into the grueling challenges that our main character has to brave through to save humanity.

From Earth to Umbria starts its narration when the Umbrian leader, JarodDask, got a highly important message from their scientists that the Earth’s sun would one day become a supernova and destroys everything in its path within millions of miles. This information has led our main character, Jarod Dask, to volunteer in starting a mission to rescue humanity from the impending doom. As the leader of the planet Umbria, which is located fifty light-years away from Earth, Jarod Dask came up with a plan to move the entire human race to Umbria to enable them in forming a new civilization.

The novel implies multiple conflicts. As an alien from another planet, Jarod Dask faces numerous obstacles in persuading humanity. The countdown to destruction is drawing closer, Jarod Dask’s plan must be executed as swiftly as possible.

Will Jarod Dask be known as the Umbrian Leader who saved an entire race? Or will he fail greatly be the reason for the loss of billions of lives? If you want to know what happens to the Earthlings and to Jarod Dask’s mission, you can read the book on Amazon. The book is available in different formats to suit the needs of all readers.

Patricia Howell lives in Louisville, Kentucky. She was a former teacher who taught Science and Language Arts. Her experience in teaching these subjects has led Patricia to successfully created this exciting science fiction where it involves conflicts arising from a scientific phenomenon and challenges in communication due to the clash of culture between two planets. From Earth to Umbria is Patria Howell’s first published book.