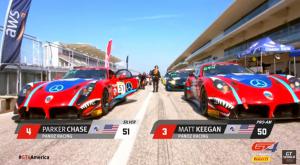 The starting grid at the COTA race in Austin, 2020, with two Panoz race cars ready to roar. 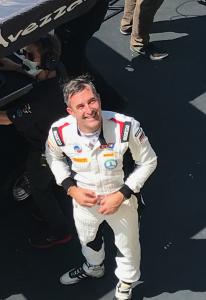 Experenced driver Ian James, after his big win at the SRO Austin race. 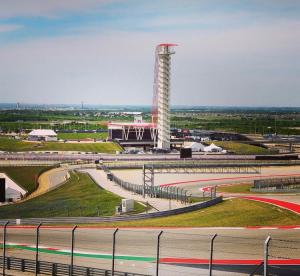 The central tower at Course of the Americas in Austin, Texas, during the SRO Tour races, September 2020

Panoz Racing: one of the elite teams in motorsports with an exciting first place finish at SRO in Austin

Galaxy is proud to support the Panoz race team. Their combination of human excellence and split-second reflex, with edge-of-physics technical excellence, is inspiring to witness on the track.”
— Michael North

NEW YORK, NY, USA, September 29, 2020 /EINPresswire.com/ — Panoz Racing proved they are one of the elite teams in their class with an exciting first place finish last Saturday in Austin Texas, in the SRO World Challenge America GT4 race. Circuit of the Americas is a superb yet punishing track that puts high stress on all drivers and their cars, but due to the expert strategy and precision engineering of the team, both Panoz cars were able to perform at the highest level.

The Panoz Team had to overcome adversity entering the weekend with the unfortunate loss of one of their core drivers, Preston Calvert, due to injury. In addition to this last-minute change, the #51 car had to be completely rebuilt and re-jigged within a matter of days in preparation for the race in Austin, after damage at the SRO World Challenge America race, held at Road America in Wisconsin. Despite these setbacks, the Panoz team was able to call upon Parker Chase to join Roman DeAngelis in the newly rebuilt #51 car.

“Shout-out to the whole team — having to rebuild the car in such a short time really shows the strength of the team and the organization as a whole,” commented James.

Parker and Roman were extraordinary from the start — battling with two of the top teams in their class, ST Racing and Andretti Autosport. Meanwhile, in the Pro-Am class, the #50 car of Ian James and Matt Keegan finished second in their class behind GMG Racing.

“Both teams drove exceptionally well and executed the strategy to perfection,” stated driver Ian James in a phone interview.

Saturday was another big day for the Panoz Team as the #50 car of Ian James and Matt Keegan finished third-in-class despite an unfortunate mishap in the pits that resulted in a 10-second loss and a chance at a second place podium. Parker and Roman fell victim to the harshness of COTA as the #51 car had to retire three laps after the start of the race due to mechanical issues.

In spite of these setbacks, this was a successful weekend for Panoz Racing. With last weekend’s win under their belt, the team is working diligently to prepare both cars for the legendary Indianapolis Motor Speedway this week, in hopes of ending the season with another win.

Dan Panoz had this to say:

“I am immensely proud of the entire team, first for the extraordinary effort the entire crew put in to get the #51 car back in race shape, as well as the excellent job prepping #50. We salute the brilliant performance by veteran drivers Matt Keegan and Ian James, who brought us the second-place finish in Pro-Am.”

“Last but not least, my hat’s off to the young guns, Roman de Angelis and Parker Chase, who jointly executed a truly stunning performance for the win in their very first race in the Panoz. And a special hello to long-time Panoz driver and gentleman Preston Calvert, who was sorely missed at this event. Get well soon, Preston!”

“In summary,” Panoz added, “I would like to dedicate the 1-2 finishes by the team to the two redheads that made this all possible: my late father, Don Panoz, and Michael North, Chairman of Galaxy Magnesium, our new technical partners and primary Sponsor. And to the entire team at SRO who put on such a great event. It’s great to be back!” Galaxy Magnesium is a trade name of Asia-Pacific Group.

The Panoz Team returns to the track at the Indianapolis Motor Speedway, October 1 through 4, 2020. These events will include some public audiences. See https://www.indianapolismotorspeedway.com/

Panoz is active in the SRO Tour series, a world leader in presenting the art, science and thrill of competitive racing at the highest competitive levels. See http://www.sro-motorsports.com.

Panoz Racing and Panoz Engineering are pioneers in innovative automotive design. The company builds beautiful, powerful cars at their facility in Georgia, and participates successfully n the most challenging competitive races in the world. See http://www.panoz.com. For more information, please contact info@panoz.com

Galaxy Magnesium is this year’s primary sponsor of the Panoz team, and is progressively designing magnesium alloys for their vehicles as a powerful way of lightweighting. A joint company has been formed with Panoz, called Galaxy Motion. See http://www.galaxymagnesium.com For more information, please contact business@galaxymagnesium.com