Over 1,100 Shincheonji Church of Jesus Members Donate Plasma for the Race for the Cure 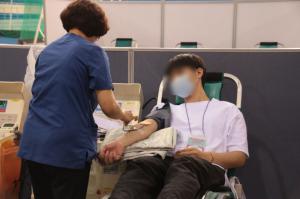 NEW YORK , NEW YORK, USA, August 27, 2020 /EINPresswire.com/ — Shincheonji Church of Jesus, the Temple of the Tabernacle of Testimony (SCJ), announced that it will be donating plasma to the second group.

To date, nearly 1,100 Shincheonji and Daegu members who have antibodies for the Covid-19 infection have donated plasma. The plasma donation is being held at the Daegu Athletics Promotion Center 27 August to 4 September. On the first day 160 people participated in the drive.

“We will continue to work closely with the Korea Centers for Disease Control and Prevention (KCDC) to make every effort to overcome Corona 19,” said a spokesperson from the SCJ Daegu branch.

Bloggers originally against SCJ have posted comments which now show signs of support. Some comments made include, “I’m sorry for the curses at first,” “Let’s end Covid-19 as soon as possible,” “Let’s quickly develop a cure and end Corona together.”

The Korea Centers for Disease Control and Prevention officially requested Shincheonji to cooperate with the donation of plasma to develop a plasma treatment for Covid-19.

According to the Centers for Disease Control and Prevention on the 26th, KCDC recently sent such a memorandum to the Shincheonji Church of Jesus Testimony.

In an official letter the KCDC stated, “As the outbreak of Covid-19 at home and abroad is on the rise again, more rapid development of therapeutic agents is required through group plasma donations, so we ask for active cooperation as we are seeking to recruit plasma through your institution.”

Previous Virtual Event: Thousands of Tamils, including Babies, disappeared in Sri Lanka. What Can be Done? TGTE
Next Shincheonji Makes the News Helping COVID-19 Recovery Efforts in South Korea