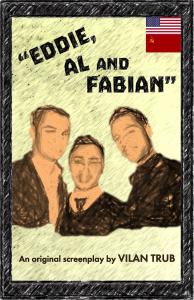 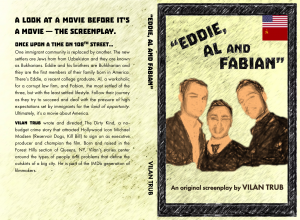 A look at a movie before it’s a movie — the screenplay.”
— Vilan Trub

FOREST HILLS, NEW YORK, UNITED STATES, February 16, 2021 /EINPresswire.com/ — Eddie, Al and Fabian is a screenplay published as a paperback that explores the Bukharian Jewish immigrant community located in Forest Hills, Queens. The goal is to showcase what a movie looks like before it’s a movie. A screenplay is only one step in the filmmaking process. It is intended as a blueprint for how to tell a visual story and is not meant as a stand-alone piece. This book is a look at a movie before actors offer their input, locations dictate how a scene will be blocked, and all the other factors that influence how the final production looks.

This book is also an opportunity to shed light on a small immigrant community known as Bukharian Jews, Jewish immigrants from Uzbekistan, and how a community undergoes changes from one immigrant generation to another.

Once upon a time on 108th Street… one immigrant community is replaced by another. The new settlers are Jews from Uzbekistan and they are known as Bukharians. Eddie and his brothers are Buhkharian and they are the first members of their family born in America. There’s Eddie, a recent college graduate, Al, a workaholic for a corrupt law firm, and Fabian, the most settled of the three, but with the least settled lifestyle. Follow their journey as they try to succeed and deal with the pressure of high expectations set by immigrants for the land of opportunity. Ultimately, it’s a movie about America.

Vilan Trub wrote and directed The Dirty Kind, a no-budget crime film that attracted Hollywood icon Michael Madsen (Reservoir Dogs, Kill Bill) to sign on as executive producer and champion the movie. Born and raised in the Forest Hills section of Queens, NY, Vilan’s stories center around the types of people and problems that define the outskirts of a big city. He is part of the IMDb generation of filmmakers.