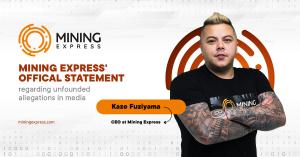 This press release is set to give an official statement and clarify any doubts with regard to Mining Express operations.

NEW YORK, NEW YORK, UNITED STATES, April 6, 2021 /EINPresswire.com/ — Earlier this year, Mining Express was suspected in fraudulent pyramid scheme by Livecoins, an independent portal on blockchain and cryptoeconomics. This press release is set to give an official statement and clarify any doubts with regard to Mining Express operations.

In January 2021, Livecoins published an article, where Mining Express company was suspected in a financial pyramid. According to the journalist’s opinion, the company is accused of a pyramid scheme activity by a website that specializes in reporting Ponzi schemes. In response to this article, Mining Express would like to issue the following statement to the media and to the public.

The company’s representatives carefully examined the information and sources provided in the article, and couldn’t find any reliable evidence or facts to support it. The assertions Mining Express is being confronted with are unfounded, with issues described in the linked article date 2.8 years back. The unsubstantiated claims mislead the cryptocurrency and general public and constitute a total misrepresentation of Mining Express and their services.

To state it categorically, at no stage has Mining Express been related to a financial pyramid. In addition, we would like to clarify the following with regard to the points raised in Livecoins article. Pyramid and Multi-Level Marketing (MLM) are fundamentally different types of business, according to the Journal of Business Ethics and as mentioned on JSTOR Daily. MLM is a legit business strategy that has been successfully used by large companies to sensitize people about their products.

At Mining Express, we remain committed to providing excellent services to our clients and will respond to all media queries received by our Press Office as per our process.

About Mining Express:
Mining Express has developed a strong and remarkable Altcoins Mining Business Model associated with a Marketing Plan that drives the growth of the partner network and at the same time increases its mining capacity by investing a large part of its revenue in the expansion and upgrade of its mining park.