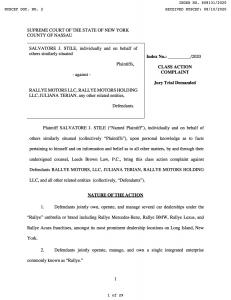 Cover page of the lawsuit 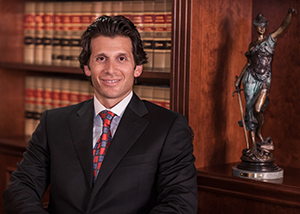 The suit, a purported class action, alleges customers paid Rallye Collision Center for labor that was not performed, received estimates for parts that were not replaced and/or received refurbished parts instead of new parts that the shop previously claimed were essential to properly repair the car. As a result, customers unwittingly drove away with unsafe cars that had declined in value. The suit also alleges Rallye paid off insurance adjusters to submit deceptive repair estimates.

Rallye, established in 1958, markets itself as the nation’s fifth-largest auto dealer and the only auto dealer group representing all four top-selling luxury brands on Long Island. Rallye Collision Center advertises that “great care will be taken to use only genuine replacement parts, factory specific paints, and exacting auto body repair methods” to ensure that their customer’s vehicle is “as good as new.”

In the suit, Stile said his 2015 Mercedes Benz S550 was repaired at Rallye after a rear-end collision in 2016 at a cost of more than $20,000, largely paid by his insurer. He subsequently discovered that he purchased labor that was not performed and parts that were not replaced. His original estimate of $20,808.15, included $14,260 for parts, $4,270 for labor. However, Stile’s invoice listed only $4,142 for parts (71 percent below the estimate) and labor charges of $10,107 (137 percent above the estimate). In this scheme Rallye reduced the amount of new parts they claimed was needed for repairs, yet increased the highly more profitable labor costs. Ultimately, Stile paid a deductible in the amount of $1,000 and his insurance carrier paid $19,808.15 for the exact same total of $20,808.15.

“Plaintiff and members of the putative class did not receive the high-quality service and parts they were promised and in fact failed to receive all material information about the repairs performed by Rallye, the nature of those transaction, and defendants’ improper financial relationships with insurance adjusters,” the suit stated, noting that customers were unaware of the true nature of the work performed.

The suit details the cases of 17 additional unnamed customers with claims of, among other things, unjust enrichment, false advertising, breach of warranty, and violations of New York’s general business and motor vehicle laws. It seeks an injunction that would end the alleged deceptive practices, unspecified damages and attorney’s fees.

Brown said he attempted to bring the alleged scheme to the attention of Rallye’s owners and its attorneys but received no response. He said the firm investigated for a year after the case was brought to the firm’s attention by a whistleblower.

The suit claims that Stile and other class members were harmed financially by the alleged deceptions in two ways: the value of their cars declined in value, including the ability to resell or trade them, and, as a result of the inflated insurance claims, they were charged higher premiums and higher deductibles for insurance coverage.

Brown said his firm began investigating Rallye’s practices about a year ago after being alerted to them by a whistleblower who intends to file a whistleblower suit within 60 days.

“Rallye violated the trust of countless consumers who came to its body shop to get their cars repaired,” said Brown. “I don’t believe these customers realized what was happening.”

“It was a pure profit play,” said Stile. “It was profit over safety. My family was driving in an unsafe car. They could have been in jeopardy.”

About Leeds Brown Law PC
Leeds Brown Law, PC is a New York City and Long Island area law firm dedicated to providing the highest quality guidance and representation to clients with concerns involving a broad range of legal practice areas. Over the last two decades, the firm’s attorneys have become widely known and respected — in New York and across the U.S. — for their ability to litigate complex legal issues effectively, and for the outstanding results the firm has achieved, particularly in the areas of employment law, class actions, civil rights, discrimination and sexual harassment. For more information visit leedsbrownlaw.com or call 1-800-585-4658.