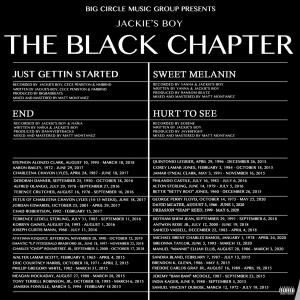 NEW YORK, NY, UNITED STATES, October 18, 2020 /EINPresswire.com/ — Grammy Award Winner Songwriter/R&B Artist Jackie’s Boy attempts to tackle racial injustice in America through his new EP “Black Chapter Vol 1”. America has never been a stranger to racial inequality when it comes to people of color, and artists are often overlooked when it comes to their perspective regarding politics, but Jackie’s Boy wants to remind us that our voice can be the loudest in the room.

His four-song “EP” consists of Just Getting Started (feat. Cece Peniston & Nmbrnd), End (feat. Naika), Sweet Melanin (feat. Yanna), and Hurt to see (feat. SOSENE). Jackie’s Boy “Black Chapter” instantly reminds us how music is still a healing method that temporarily soothes the soul. The sultry voices send a wave of peace. Accompanied by the legendary Cece Peniston, the conscious social song Just Getting Started, sings about feeling hopeless and discarded Nmbrand flows about us about being in the fields. While Cece takes us to the pain of a Mother losing their children to crooked cops. Together the trio sends a message of hope that you’re Black skin is enough and justice can be accomplished for the black community. The track was added to the Editorial Spotify playlist “Nu Funk”.

While the world dealt with the pandemic’s shock, Americans watched in horror as black lives were lost to police killings. Breonna Taylor, Jacob Blake, George Floyd, and Tyree Davis, and the list goes on. Their names plastered on the cover with many others stolen by those sworn to “Protect and Serve.”

About Jackie’s Boy – Since 2009, Jackie’s Boy has been responsible for or contributed to the sales of over 18 million records, including 6 number one albums and 20 top ten singles. One of his first singles, Love & Beyond, topped the R&B charts at #4 and was featured on iHeart Radio’s “up and comer” to watch.