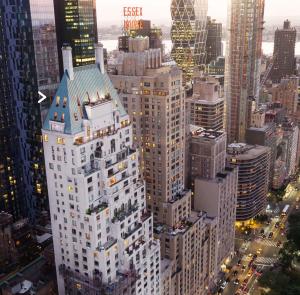 Welcome home to the most iconic triplex penthouse of New York City. 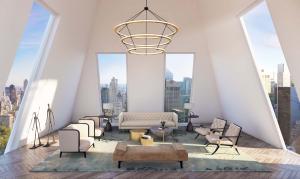 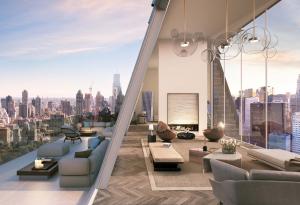 Hampshire House has oversized windows to bring the outside in and filter in an abundance of natural light. 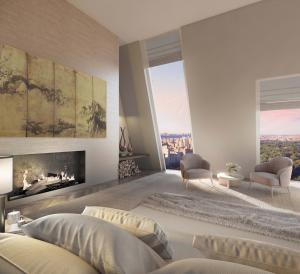 This unparalleled real estate offering presents a once-in-a-lifetime opportunity to reside in one of the most unique and trophy penthouse in the world. 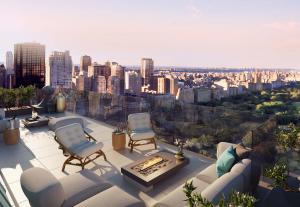 Framing the incredible city and Central Park, a view that will never change, the award-winning design calls for 9,650 square feet of interior and exterior space.

Hampshire House Triplex Penthouse to Auction to the Highest Bidder with Tal Reznick and Shawn Elliott of the Elliott Team and Nest Seekers International.

Years of passion and knowledge went into the planning, design, and obtaining of the permits necessary to offer this extraordinary offering.”
— Arnon Katz, Seller

NEW YORK, NEW YORK , UNITED STATES, November 16, 2020 /EINPresswire.com/ — Perched thirty-seven floors above the 50-yard line of Central Park South on Billionaire’s Row, the most iconic triplex penthouse of New York City’s future, steeped rich in its history, will auction online next month via Concierge Auctions in cooperation with Tal Reznick and Shawn Elliott of the Elliott Team and Nest Seekers International. This unparalleled real estate offering presents a once-in-a-lifetime opportunity to reside in modern luxury with unobstructed views of Central Park to North Manhattan, as well as Midtown skylines, and private access atop the historic and iconic c1930s Hampshire House, one of Central Park’s most exclusive white glove buildings.

Currently offered for $40 million and appraised at $100M upon completion ($15-$20M estimated finish costs), the property will sell with No Reserve to the highest bidder December 18-22nd via Concierge Auctions’ online marketplace, ConciergeAuctions.com, allowing buyers to bid digitally from anywhere in the world.

“Years of passion and knowledge went into the planning, design, and obtaining of the permits necessary to offer this extraordinary offering,” said Arnon Katz, seller. “There is absolutely nothing else like it in the world, and this is what makes it truly special. I’m confident that Concierge Auctions’ incredible global reach and a team of top talent will identify the perfect buyer, an individual as unique as this property itself, who not only understands the value, but who also has the vision to complete this magnificent penthouse to its reality.”

With pre-approved, construction “shovel”-ready design, plans, and permits held by New York City’s most luxurious, professional, and high-end general contractor SilverLining and lauded SPAN Architecture, the design won the Interior Design Magazine award for the Best of Year residential project in the world for 2018 (on the board)—150 Central Park South is ready for completion. The current building-approved plans call for a 5-bedroom, 5 full and 1 half bathroom residence and offers a certainty on cost to build the design as-is the buyer could easily customize the triplex to be whatever he or she desires.

“This is the ultimate trophy property. All of the work has been done in advance for the next owner, including award-winning plans by a renowned team of architects and designers,” said Peter Pelsinski, principal of SPAN Architecture and Princeton University professor. “Only here, in the middle of Billionaire’s Row, can you get these views. You literally feel like you’re in the Park, and that’s something almost no one—if anyone—else has.”

Framing the incredible city and Central Park, a view that will never change, the award-winning design calls for 9,650 square feet of interior and exterior space with walls of glass, skylights, and oversized windows to bring the outside in and filter in an abundance of natural light. With outdoor living to span an incredible 1,125 square feet, any one of four terraces, including a private Central Park-facing terrace off the master—becomes the perfect backdrop for formal or casual entertaining. A potential viewing gallery will offer unobstructed skyline views, no matter the season.

“This is a unique opportunity to own an iconic piece of Manhattan real estate,” stated Elliott. “The discerning buyer will have a really large penthouse with beautiful 360-degree views and outdoor terraces facing Central Park—all with the unparalleled, virtually unheard of. I’m confident that whomever is fortunate enough to win this property on auction day will likely never trade it again, making it a true once-in-a-lifetime opportunity that simply will never exist again.”

Additional features include a 36th-floor waiting room accessed by passenger elevator, with access to a private elevator into the residence; the unused attic space is transferable indefinitely and will always be attached to the penthouse unit; white glove building amenities such as private elevator access, a doorman and concierge, a fitness club, spa, valet parking, and a historic cache and notable list of past residents—all just steps away from Central Park, 15-minutes to Grand Central Station, and under an hour to John F. Kennedy International Airport.

“This project represents a once in a lifetime opportunity for a buyer to get the world’s most unique and trophy penthouse,” stated Eli Bar, seller. “Located in the center of Central Park South with an unobstructed view of Central Park this project when complete will raise the bar to be the one of the world’s most desirable residential penthouse. With a low carrying cost and huge upside in value, the Penthouse at 150 Central Park South will have the potential to break the price record for any residential penthouse ever sold in New York City.”

Iconic early 19th century era architecture and a coveted location at the near center point of Central Park South (“Billionaire’s Row”) between Park and 8th make Hampshire House the ultimate NYC address. Notable for its steeply pitched copper roof with two tall chimneys that stand out and can be seen in almost every movie or show featuring Central Park among its West 57th Street neighbors, Hampshire House is home to many top hedge fund managers and lawyers, and boasts an impressive list of past residents, including the artist Frida Kahlo and tenor Luciano Pavarotti. Steps away from Central Park’s most quintessential spots, including The Mall, the Sheep Meadow, and the Pond and Gapstow Bridge. Hampshire House also affords prime access to a handful of subway lines at 57th Street, 5th Avenue, and Columbus Circle stations.

The Penthouse at 150 Central Park South is available for showings daily by appointment and for private virtual showings.

As part of Concierge Auctions’ Key for Key® giving program in partnership with Giveback Homes, the closing will result in a new home built for a family in need.

About Concierge Auctions
Concierge Auctions is the largest luxury real estate marketplace in the world, powered by state-of-the-art technology. Since its inception in 2008, the firm has generated billions of dollars in sales, broken world records for the highest-priced homes ever achieved at auction, and is active in 41 U.S. states/territories and 29 countries. Concierge curates the most prestigious properties globally, matches them with qualified buyers, and facilitates transparent, market-driven transactions in an expedited time frame. The firm owns the most comprehensive and intelligent database of high-net-worth real estate buyers and sellers in the industry. As a six-time honoree to the annual Inc. Magazine list of America’s fastest-growing companies, it now joins the Inc5000 Hall of Fame; was named No. 38 on the 2018 Entrepreneur 360™ List recognizing 360 small businesses every year that are mastering the art of and science of growing a business in the areas of impact, innovation, growth, leadership, and business valuation; and has contributed more than 200 homes to-date as part of its Key for Key® giving program in partnership with Giveback Homes™, which guarantees that for every property the company sells, a new home will be built for a family in need. For more information visit conciergeauctions.com.