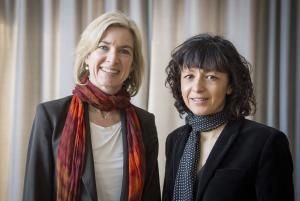 Genius 100 Foundation congratulates two of its Visionaries, Dr. Emmanuelle Charpentier and Dr. Jennifer A. Doudna, on being awarded the Nobel Prize®

We are awed by the discovery of these two female scientists from different parts of the world, who have come together due to their brilliance and fortitude, to make it a better place for so many”
— Ambassador Ido Aharoni, Co-Founder and Global Ambassador of Genius 100

NEW YORK CITY, NEW YORK, UNITED STATES, October 8, 2020 /EINPresswire.com/ — It is with tremendous pride that we congratulate two of our Genius 100 Visionaries, Dr. Emmanuelle Charpentier and Dr. Jennifer A. Doudna on being jointly awarded the Nobel Prize® in Chemistry 2020.

Announced yesterday by The Royal Swedish Academy of Sciences, Drs. Charpentier and Doudna received this honor for the development of a method for genome editing, referred to as Genetic Scissors: a tool for rewriting the code of life.

Using these, researchers can change the DNA of animals, plants, and micro-organisms with extremely high precision. This technology has had a revolutionary impact on the life sciences, is contributing to new cancer therapies and may make the dream of curing inherited diseases come true – and making it possible to change the code of life over the course of a few weeks.

“There is enormous power in this genetic tool, which affects us all. It has not only revolutionized basic science, but also resulted in innovative crops and will lead to ground-breaking new medical treatments,” says Claes Gustafsson, chair of the Nobel Committee for Chemistry.

Since Charpentier and Doudna discovered the CRISPR/Cas9 genetic scissors in 2012 their use has exploded. This tool has contributed to many important discoveries in basic research, and plant researchers have been able to develop crops that withstand mold, pests, and drought. In medicine, clinical trials of new cancer therapies are underway, and the dream of being able to cure inherited diseases is about to come true. These genetic scissors have taken the life sciences into a new epoch and, in many ways, are bringing the greatest benefit to humankind.

Drs. Charpentier and Doudna have been part of the Genius 100 Community since its founding in 2016. Inspired by Einstein, the Genius 100 Foundation was created to honor one hundred exceptional individuals – whether they are scientists, artists, philanthropists, innovators, or other paragons of excellence in their own disciplines – united by two qualities: great thinkers and great doers.

“We are awed by the discovery of these two female scientists from different parts of the world, who have come together due to their brilliance and fortitude, to make it a better place for so many people,” states Ambassador Ido Aharoni, Co-Founder and Global Ambassador of Genius 100.

Together with our entire Genius 100 Community around the globe, we applaud Dr. Emmanuelle Charpentier and Dr. Jennifer A. Doudna on their positive influence, their visions for the future, and are excited to have the opportunity to engage with them to inspire the next generation of geniuses.
Nobel Prize® is a registered trademark of the Nobel Foundation.

About The Genius 100 Foundation

Genius 100, referred to as G100, was born out of the centennial celebration of Einstein’s Theory of Relativity. The organization, first called The Einstein Legacy Project (ELP), was launched in 2016, with a celebration titled ‘Century of Genius’ which attracted some of the world’s brightest and most innovative minds, including many of the 100 visionaries, such as Deepak Chopra, Ruth Bader Ginsburg, Michael Bloomberg and Wynton Marsalis and, of course, Dr. Emmanuelle Charpentier and Dr. Jennifer A. Doudna, who contributed their vision statements in the publishing milestone “Genius: 100 Visions of the Future.” The making of the book can be viewed here. In 2018, the ELP became the Einstein Foundation strictly used for academic purposes at the Hebrew University. And, in 2019, the G100 was created.

Based in Toronto and New York, with a global footprint, Genius 100 Foundation is an active and engaged community of exceptionally imaginative and impactful human beings. These accomplished, compassionate minds have joined together to re-imagine the future – and to implement creative initiatives to improve our world. These great visionaries raise the bar on what is achievable within their fields. Collectively, in collaboration, they can make the impossible possible.

The Genius G100 Foundation Mission
To support humanitarian and environmental initiatives within the G100 community through funding and partnerships.