From Executive Producer Joey Horn, “A Call to Spy” Now Streaming and in Theaters 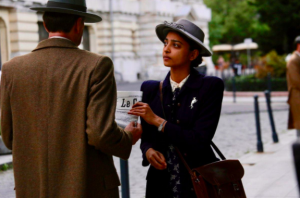 A Call to Spy

NEW YORK, NY, UNITED STATES, November 5, 2020 /EINPresswire.com/ — The female-written, directed, and produced film “A Call to Spy” is now available to watch via streaming services and in select theaters across the United States and United Kingdom.

In her first foray into the film industry, international businesswoman and philanthropist Joey Horn served as an executive producer, and it was directed by Lydia Dean Pilcher. The screenplay was written by Sarah Megan Thomas who also appears in a starring role alongside Stana Katic and Radhika Apte. A historical drama, the film was inspired by the true stories of three women who worked as spies during World War II.

The film was released in theaters on October 2nd by IFC Films in the USA and October 23rd by Signature Entertainment in the UK. It is also available to stream via Amazon Video, Apple TV+, YouTube, Google Play, Vudu, XBox, Xfinity, Spectrum, and DirecTV.

Premiering on June 21st, 2019 — the 75th anniversary of D-Day — at the Edinburgh International Film Festival, the film has gone on to win numerous awards. At the Whistler Film Festival it was awarded the Audience Choice Award, earning the highest percentage of votes since the 2016 festival in which “La La Land” took home the prize. At the 2020 Santa Barbara International Film Festival it won the Anti-Defamation League Award in a unanimous vote by the jury, and also received the “Best Women-Directed Feature” award from the Alliance of Women Film Journalists.

“The story of the female operatives that played such an integral role in the World War II espionage effort is one that deserves to be told, and I am humbled and honored to have been able to work with all of the amazing women behind this film on bringing that story to life,” said Horn.

A Call to Spy

Joey Horn is the managing director for Oak Management AS, a private investment management company. Horn has built a successful career in the investment banking industry with a focus on strategy, mergers, and branding within the corporate retail sector, playing a pivotal role in the IPO of the luxury department store giant Saks Fifth Avenue.

She is involved with the nonprofit organizations Right to Play, Mothers2Mothers, Cancer Research UK, and Restore the Music UK. For the latter, she chaired the committee for a gala fundraiser and was able to raise over £150,000 toward grant funding for music education programs.