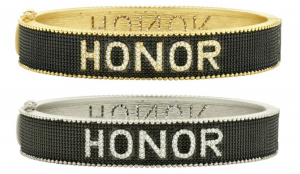 I designed the HONOR bracelet as a way to give back to female veterans, women currently serving and female spouses who embody endless strength, honor and courage through the challenges they face.”
— Freida Rothman

BROOKLYN, NY – (NOVEMBER 12, 2020) – With a powerful launch timed to Veteran’s Day 2020, FREIDA ROTHMAN, the Brooklyn-based luxury lifestyle brand, has proudly debuted its campaign celebrating the resilience, honor, and courage of women. Women of Strength: Honor Edition is an ode to female endurance and fortitude, paying tribute to the remarkable women of our nation’s Armed Forces. In this campaign, women of the military share their stories of strength — how they faced challenges in a male-dominated field, and how they achieved unforgettable accomplishments.

Women of Strength: Honor Edition pays homage to the stories and sentiments of women that have shaped Freida Rothman as a mother, daughter, and designer. The print, digital, and social campaign features women who are actively serving or veterans of the Army, Marine Corps, and Air Force, each of whom has broken barriers and made a difference to pave the way for younger generations. Each of the women in the campaign wears an HONOR bracelet.

With brave hearts and bold spirits, these heroes share their own tales of tenacity first-hand in a series of interviews with Freida, being released each week at FreidaRothman.com and Freida’s social media channels. These women of HONOR are a source of inspiration whose experiences remind us all to believe in ourselves.

“I designed the HONOR bracelet as a way to give back to female veterans, women currently serving in the military, and female spouses who embody endless amounts of strength and courage through the challenges and adversities they face,” said Freida Rothman. “The textured dark rhodium symbolizes their grit and the word HONOR is handset in sparkling pavé to remind each woman of their femininity. This bracelet celebrates the heroic women who inspire us every day.”

The HONOR bracelet is an heirloom-quality hinged bangle featuring handset pavé stones. It is offered in two metal finishes: Freida’s signature black and gold featuring hand painted dark rhodium and 14K matte gold, as well as a sleek black and platinum rhodium variation. Priced at $395, a percentage of sales from the HONOR bracelet will be donated to supporting female veterans though organizations including Attitudes & Attire®, a non-profit whose Boots to Heels℠ program assists women transitioning from military to civilian life by focusing on job readiness; and through West Point Women, a global network providing mentorship, education and support to women graduates and cadets of the United States Military Academy. The bracelet is available for purchase at FreidaRothman.com and at select retailers nationwide.

Women featured in the campaign include:

Sara Potecha, a former Army Captain and one of the first women to graduate from the United States Military Academy at West Point. She is the author of West Point Woman, a public speaker and a consultant to Fortune 100 companies.

Kelsey Baker is a former Captain in the United States Marine Corps where she served as a uniformed victim’s advocate for military sexual assault. Currently working on her civilian victim advocacy credentials, her ultimate goal is to bridge the gap between civilians and military, affecting change in sexual health education and the outcomes of childhood trauma through her new career as a writer.

Meredith Brown is a retired Major from the United States Marine Corps. She is a Senior Business Continuity consultant at a major global financial institution, applying the skills she learned in the Marines to be an effective leader who is mission-focused and team-oriented.

LTC June S. Copeland is an active duty Lieutenant Colonel in the United States Army. When graduating the United States Military Academy, she didn’t know the Long Gray Line would continue with her three daughters following in her footsteps to also attend USMA.

Campaign images and one-on-one video interviews between Freida Rothman and Women of Strength: Honor Edition can be accessed at: https://www.dropbox.com/sh/qbuuovsu2imr8wo/AADDgfVB-jq_JOCSROLnij7aa?dl=0

ABOUT FREIDA ROTHMAN:
Born and raised in Brooklyn, Freida Rothman is a second-generation jeweler, a mother of four, and an entrepreneur striving to remind every woman of her inner strength. Her luxury lifestyle brand is sold nationwide and features sterling silver jewelry, Italian Nappa leather goods and statement-making eyewear. Taking design inspiration from the city streets around her, Freida’s mixed-metal pieces elevate Brooklyn grit— from the New York City skyline to the steel and cable span of the Brooklyn Bridge — into effortless elegance for your everyday. Since 2013, she has personally designed each piece of jewelry with the utmost attention to detail and craftsmanship. Beyond reflecting the spirit of strength and determination in her jewelry, Freida supports new emerging talent by serving as a mentor on the Accessories Innovation Committee. She’s also a proud member of the Female Founder Collective, a network of businesses led by women, supporting women. For more info, please visit FreidaRothman.com and @FreidaRothman on Instagram.