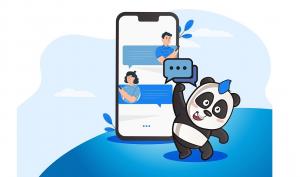 This exodus wave has also made privacy-centric users rethink their messaging app choices and found the PunkPanda chat app from the U.K.

Its decentralized infrastructure can accommodate and process a large number of users and messages without any setback, allowing users to chat without having to worry about interruptions”
— PunkPanda

NEW YORK, UNITED STATES, January 29, 2021 /EINPresswire.com/ — “Have you made the switch?” that has been one of the most common questions asked between friends recently.

In early January, WhatsApp released an announcement out of nowhere to all global users, notifying users about the major changes made to its privacy policy, causing an uproar in the messaging app market. Although users can choose to agree and move on with its new policy or quit WhatsApp altogether, the new policy will automatically take effect on 8th February anyway.

Since the announcement, tens of millions of WhatsApp users have been on the search for an alternative messaging app as they worry about the safety of personal privacy and their private messages.

In an attempt to prevent users from uninstalling its app, WhatsApp made another public announcement stating that they have postponed the update to May 2021 to counter any confusion faced by users.

The mass exodus from WhatsApp has indirectly benefited the messaging apps Telegram and Signal, as they were swarmed with a surge in new user registration daily. But they soon ran into some complications: the former messaging app might be packed with groups associated with violence and hatred, while the latter was overwhelmed by the sudden surge in new users, causing its system to go down due to overloaded server. Based on the events above, both apps clearly have their flaws and shortcomings.

With Signal’s server crash, it reflected a major problem faced by most messaging apps. Is current communication technology ready to cope with the massive volume of internet users?

This exodus wave has also made privacy-centric users rethink their messaging app choices and found the PunkPanda chat app from the United Kingdom. According to a spokesperson, PunkPanda has also seen an enormous surge in new sign-ups recently. It has reached about 50,000 worldwide users now, a surprisingly high number for an app launched just over three months.

While PunkPanda’s current user count is still far from its million users’ goal, PunkPanda claims that its decentralized infrastructure can accommodate and process a large number of users and messages without any setback, allowing users to chat without having to worry about interruptions. PunkPanda is free to use for users across Android and iOS platform.

Besides the basic individual chat and group chat features, PunkPanda has also developed two exclusive features: ZAP and HIDE chat features. The ZAP feature can completely obliterate any message in one swoop, eliminating the risks of sending messages to wrong recipients by mistakes. On the other hand, the HIDE feature allows senders to turn messages into a string of encrypted code, preventing anyone from stealing it. Senders can also choose to unencrypt the message by unhiding it anytime.

There are hundreds of messaging apps available on the internet at the moment, each with its own features and advantages, but if asked about which features are the most important, there’s no doubt that the users would place privacy and security at a higher priority because no one in their right mind would want their private message to be monitored by large corporates.

With its focus on privacy and security, PunkPanda believes that it is in line with internet users’ demand for messaging apps and that its market position will allow it to gain an edge in the market. PunkPanda is updated monthly to improve its stability and add even more language support to enable more worldwide users to enjoy its user-friendly interface.