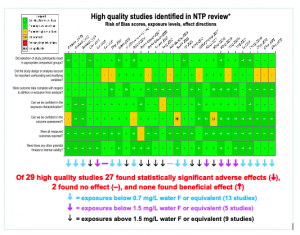 Neurath’s poster at a 2020 epidemiology conference shows that of the 29 studies that the NTP classified as higher quality, 27 found neurotoxic effects. Of those finding adverse effects 18 were at fluoride levels below 1.5 mg/L and 13 at levels below 0.7 mg/L.

NEW YORK CITY, NY, US, October 15, 2020 /EINPresswire.com/ — The National Toxicology Program (NTP) has concluded in a major review that fluoride “is presumed to be a cognitive neurodevelopmental hazard to humans.”

The review has taken four years and was requested in 2015 by the citizen group Fluoride Action Network (FAN) because of the accumulating evidence that fluoride damages children’s brains.

In 2019, a draft of the report was sent to the National Academies of Sciences of Engineering and Medicine (NASEM) which made suggestions to make the report stronger and more transparent.

On October 19, the NASEM will reconvene to examine the revised report in an open public meeting.

“…when considering all the evidence, including studies with exposures to fluoride levels higher than 1.5 mg/L in water, NTP concludes that fluoride is presumed to be a cognitive neurodevelopmental hazard to humans … based on … a consistent and robust pattern of findings in human studies … demonstrating that higher fluoride exposure is associated with lower IQ and other cognitive effects in children.”

However, according to Chris Neurath, FAN’s research director,

“Fluoride’s danger to brain development is even worse than the NTP acknowledged. When claiming that studies lower than 1.5 ppm were less consistent, NTP used a crude risk assessment method, which improperly excluded the four highest quality studies. These studies, all funded by the NIH, found significant effects when pregnant women or bottle-fed infants were exposed to fluoride below 0.7 mg/L, the level of artificial water fluoridation, or equivalent doses from other sources (Bashash 2017, 2018; Green 2019; Till 2020).”

A poster Neurath presented at a recent scientific conference of the International Society for Environmental Epidemiology showed that of the 29 studies that the NTP classified as higher quality, 27 found neurotoxic effects. Of those finding adverse effects 18 were at fluoride levels below 1.5 mg/L and 13 at levels below 0.7 mg/L.

“With 93% of the 18 higher quality low-dose studies finding harm to the child’s brain, this demonstrates remarkable consistency and belies the NTP contention that the evidence is unclear at levels relevant to the US and water fluoridation”, said Neurath.

The graphic above is from the poster. It’s a color-coded scoring chart of just the highest quality studies, according to NTP’s own scoring system. Each study is scored on seven criteria with green boxes indicating good scores, yellow a mediocre score, and red a poor score. The criteria include evaluation of whether there are unlikely to be alternative explanations for the findings. The colored arrows indicate the fluoride level for each study that found significant neurotoxic effects, like loss of IQ.

“the four strongest studies at low doses, funded by the NIH with millions of dollars and all published in the past 3 years, had all green quality scores. For the NTP to reach a conclusion of ‘inconsistent’ evidence below 0.7 mg/L they had to effectively bury these studies. Their quantitative assessment excluded all of them with no valid justification.”

“Overall, the NTP report concluded there was high confidence that fluoride harms the developing brain, even at exposures down to 1.5 mg/L. The NTP’s confidence rating of ‘presumed hazard’ is the highest confidence level possible. A rating of ‘definite hazard’ would require controlled studies that deliberately dose pregnant women and infants, which would be unethical with a presumed neurotoxin. Given the voluminous consistent evidence, the NTP also concluded that future studies, even if they did not detect adverse effects, would be unlikely to reduce their hazard conclusion. At levels relevant to artificial fluoridation, the NTP’s individual study assessments demonstrate a clear hazard to children’s brains as well. However, the NTP appears to have bent to pressure from the CDC, the main promoter of fluoridation, when it obscures and equivocates about the body of low-dose evidence” (see video interview with Chris Neurath, https://youtu.be/KDXaNd0wX2Y).

“Whether one accepts the NTP’s questionable characterization of findings of cognitive deficits below 1.5 mg/L, their admitting harm at or above 1.5 ppm should end water fluoridation. An exposure affecting millions of people requires a minimum 10x safety factor, to prevent harm to more susceptible people. These include: people who drink a lot of water, have genetic susceptibility, have kidney disease, are male, elderly, or very young, or have other risk factors. Drinking water with fluoride above 0.15 ppm should no longer be considered safe. CDC’s current recommended level, to protect against tooth decay, is 0.7 ppm. It is time to act and end fluoridation to protect America’s children.”

The Fluoride Action Network considers Dr. Linda Birnbaum’s, former head of the NIEHS, call for action on this issue to be a highly significant moment in the 75-year history of this issue.

“It’s important for Americans to see integrity in action from someone who held such an important position in an agency of the National Institutes of Health.”