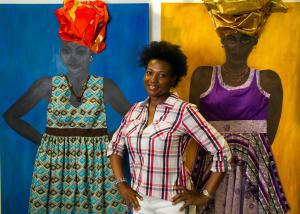 Master Artist Evelyn Adams with her most recent works. 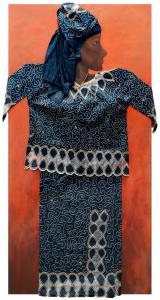 “My work centers around textiles and traditional Ghanaian clothing, in which it explores the country’s rich culture and identity”

My work centers around textiles and traditional Ghanaian clothing, in which it explores the country’s rich culture and identity”
— Evelyn Adams

NEW YORK, NEW YORK, USA, October 28, 2020 /EINPresswire.com/ — The world of fine arts is a vast empire filled with endless possibilities. With every blank canvas and a fresh new wave of talent, another Renaissance is just waiting to happen. In this new age of creativity and advancement, breakthrough artist Evelyn Adams looks to create new grounds as she explores new ways of impacting others through her work and passion.

Evelyn Adams’ world is a collision of two rich cultures. Her background as a Ghanian and upbringing as an American merges two different schools of thought. Yinka has lovingly embraced both in her art and introduces a new form of creative expression. “My work centers around textiles and traditional Ghanaian clothing, in which it explores the country’s rich culture and identity,” shares the artist Yinka. “I expressed myself through the use of acrylic paint to demonstrate African figures with facial expressions.”

Yinka’s work makes use of diverse media, themes, and styles. By introducing mixed media, Evelyn’s art comes to life through a vivid display of acrylic paint. She brings her Ghanian origins to life by clothing her paintings with various textiles, clothing, and beads.

Yinka first dove into art at an early age. As a little girl, she would draw whatever caught her attention. It didn’t take long for Evelyn Adams to realize that she wanted to become an artist. Yinka’s core belief is that art has its language. She maintains that interpretations may change depending on who the audience is.
Through the years, Evelyn’s work has reached greater heights. She has exhibited many of her artworks in the Long Island area and has also showcased her work internationally in South Korea countries. She’s held many solo exhibitions and joined various group exhibitions throughout her life. Some of her solo exhibitions include “My People, My Culture & My Birthplace,” “Peering Sky,” “Mysteries Within The Sky,” and “Faces of Inspirational Women.” She has also participated in group exhibitions like Victors of Survival, Individual Self Portraits, Journey, Black History Month, and many others.

On October 1, 2015, her artwork, “Unite and Fight For A Cure,” would appear in Port Jefferson Times-Herald. This honor came after her work won third place in the “Victors of Survival” competition for breast cancer awareness month. Yinka also appeared in ArtTour International Magazine’s documentary, “Sacred Waters,” which aired on August 6 and 13 at the MNNHD Channel in Manhattan’s program, TWC/Spectrum.

Evelyn Adams hopes to continue growing her art and exploring new mediums to introduce into her work. She seeks new opportunities to learn, grow, and showcase what talent she offers to the world. Evelyn does not fear failure and will go over and beyond to achieve her wildest dreams. Visit Yinka’s website and Instagram account to learn more about the artist and her work.