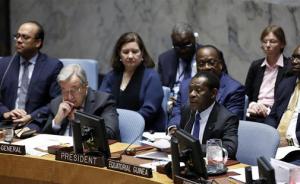 During their presidency of the United Nations Security Council, H.E. Obiang Nguema Mbasogo, addresses this body in New York. 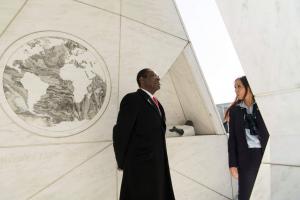 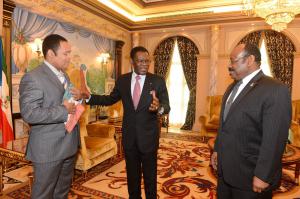 NEW YORK CITY, NEW YORK, October 6, 2020 /EINPresswire.com/ — His Excellency Obiang Nguema Mbasogo, President of Equatorial Guinea, is slated to receive the 400 Years of African American History Award from the H.R. 1242 Resilience Project in the capitol city of Malabo this week. The award is to recognize an African Head of State that has contributed with building bridges for humanity and the African American Diaspora.

New York based H.R. 1242 Resilience Project will also culminate their yearlong commemoration for the 400 Years of African American History in Equatorial Guinea. There inaugural event was held at Brooklyn Bridge Park in Brooklyn, New York on August 17, 2019, overlooking the East River under the theme: 400 Years: Resilience, Faith, Healing and Partnership.

Law enforcement, clergy, military, schoolteachers, principals, community advocates, labor, and African Ambassadors on the United Nations Security Council were honored on Pebble Beach. Smaller events continued for just over a year. This initiative was designed to commemorate the first African American slaves that arrived in Point Comfort, Virginia in 1619, and honor the contributions of African Americans and Africans to the United States of America.

In 2014, the Republic of Equatorial Guinea with the personal support of its President, sponsored the rowboat christened Spirit of Malabo, that Don Victor Mooney, of Flushing, Queens used on his fourth attempt to row from Africa to New York’s Brooklyn Bridge, a journey that took 21 months.

His mission was to encourage voluntary HIV testing. Mooney would follow one of the many deadly transatlantic slave trade routes, his ancestors once endured during the Middle Passage. With this feat, he became the first African American to row across the Atlantic Ocean. In 2016, Don Victor Mooney and his family were flown to Equatorial Guinea where President Obiang granted them nationality and gifted a home in the administrative capitol city of Oyala.

Equatorial Guinea will mark the 52 Anniversary of Independence on October 12. The country is a beacon of light for stability, economic growth, and human development in Africa. In January 2020, they ended a two-year term as a member of the United Nations Security Council (UNSC). During the country’s presidency of the Security Council, Equatorial Guinea’s Foreign Minister Simeon, H.E. Oyono Esono Angue open the debate on silencing the guns in Africa, at the UN headquarters in New York on February 27, 2019. The UN Security Council went on to adopt a resolution expressing its readiness to contribute to the African Union’s pledge to “end all wars in Africa by 2020” and “achieve the goal of a conflict-free Africa”.