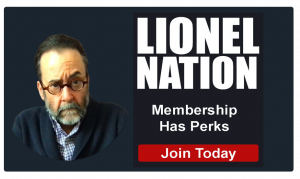 Lionel is an Emmy Award winning legal and media analyst. Not to mention talk radio legend and heritage podcaster (before it was even cool or heard of). He’s a licensed trial lawyer, author, spoken word monster, humorist, contrarian and holds a blackbelt in realpolitik.

As social media channels and platforms are becoming increasingly limited via censorship for controversial political commentators, where does one go to receive the truth? The brutal naked (and in some cases) offensive truth. Where no one’s spared, no transgression forgiven and no misinformation and propaganda countenanced. Voila! lionelmedia.com

Truth warriors and verity sentries, the primary political focus of this new channel initially pivoted decidedly towards the 2020 “election.” And how couldn’t it? The CV1984 claptrap is prolix and dutiful and woke heteroclite psephologists are now zeroing attention to address reality: a Joe Biden presidency. That simple. And I’ve (again) one focus, scilicet unabashed unvarnished naked truth. Join us. Mother America is under attack ideologically and spiritually by an enemy determined to destroy Her foundation and essential principles. This is an existential fight and as such requires the commitment of a new centurion, a truth warrior committed to protecting our constitutional republic. But it’s a new war and a new enemy. Political left and right are dead. Liberal versus Conservative might have made since during the Reagan epoch but not now.

“He wears the mantle of Lenny Bruce, with Lenny’s own tropisms: The Oblique, The Irreverent, The Tangential, The Concupiscent, The Polymorphous Perverse, The Arcane, The Numinous. And yet Lionel brings to the table his own savory: A love of the mother tongue and a gonzo vocabulary that puts his logo on all his works, whether talk-show hosting, standup-comic spritzing, or hanging out – with himself a minor art form.” (Legendary producer Jerry Wexler)