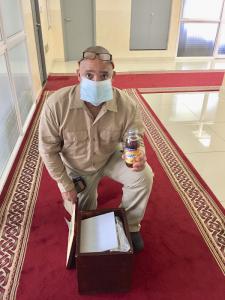 Don Victor Mooney, kneels down inside the Ministry of Foreign Affairs and Cooperation in Equatorial Guinea with a Snapple bottle. 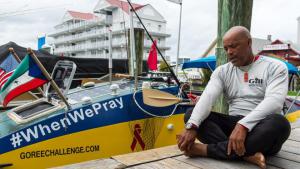 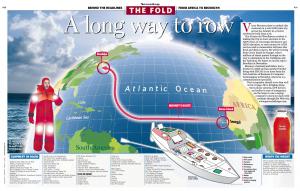 A special edition of Newsday shows Mooney’s rowing route for his first attempt in 2006, with a bottle of Snapple.

The first African American to row across any ocean, shares the beauty of Corporate Social Responsibility in action with a bottle of Snapple.

It’s my hope that future historians will come to know how the beverage industry played a role in helping their consumers realize dreams, sometimes not ordinary”
— Don Victor Mooney

On his fourth attempt, Mooney completed his grueling 21-month transatlantic row from Canary Islands, which located off the west African coast to New York’s Brooklyn Bridge, in memory of his brother who died of AIDS. With this feat, Mooney became the first African American to row across any ocean.

He made landfall in St. Martin, French West Indies on June 28, 2014, before continuing to New York.

Snapple was Mooney’s first sponsor in 2005. Last week, Mooney hand delivered a time capsule in Equatorial Guinea to commemorate the 400 years of African American History. Of the many items inside the time capsule, it included a bottle of Snapple.

“It’s my hope that future historians will come to know how the beverage industry played a role in helping their consumers realize dreams, sometimes not ordinary,” said Don Victor Mooney.

Mooney’s boat was christened the Spirit of Malabo. It was sponsored by the Government of Equatorial Guinea, with the personal support of H.E. Obiang Nguema Mbasogo, Head of State.

Among other things, in Mooney’s audience with the President on October 9, 2020 at the People’s Palace, he left a draft copy of his book called, Espiritu de Malabo – Never Give Up. The book is expected for release in 2022. It will be written in Spanish and English, with limited editions in French, Portuguese, Chinese, and Arabic. A children’s version will also accompany the book release.

Previous Cashforce is advancing cash forecasting innovation with the launch of its “Cashforce NextGen” platform
Next EDTMax.com Offers Free Online Consultation With a State Licensed MD to see if a Person Qualifies for an ED Prescription