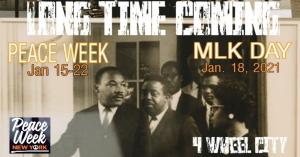 4 Wheel City is celebrating the 11th annual Peace Week and MLK Day with a release of the new video for “Long Time Coming” on Monday, January 18th.

“On Monday 1/18/21 MLK DAY we are releasing a music video tribute, “Long Time Coming”, as A CALL FOR PEACE & UNITY IN THE NATION in honor of the Legacy of Dr King & the 11th Annual Peace Week in NYC,” commented Namel Norris, founder of 4 Wheel City. “The video highlights our journey over the past 15 years from making music in Rick’s apartment in the Bronx to being invited to speak at the Whitehouse and perform on Capitol Hill. It makes a connection to how our visit is similar to Dr.King’s when he visited to speak about the Civil Rights Act of 1964.”

Peace Week is a week-long series of events held from January 15th – 22nd in honor of Dr. Martin Luther King Jr.’s legacy of non-violence. This year it is being hosted by LIFE Camp and the City of New York. The goal of Peace Week is to create a culture of peace throughout NYC by hosting events, performing activities or encouraging personal actions toward creating inner peace and setting a positive example for our young people.

4 Wheel City is Namel “Tapwaterz” Norris and Ricardo “Rickfire” Velasquez are both wheelchair bound after suffering from gunshot wounds. Their focus as highly skilled musicians is to share their life-experiences about disabilities, gun crime and other vital issues. This has won the group widespread, universal praise.